The Pope County Comprehensive Water Plan was approved in 2013 by the Board of Water and Soil Resources.  This is the guiding document that includes the monitoring and assessment completed in the 8 Lake TMDL Study and what implementation efforts will need to be accomplished to make improvements in water quality.

This is the plan that will guide the next five years of project and program implementation by local agencies in Pope County.

Pope SWCD and the Minnesota Pollution Control Agency, are working together to administer water quality analysis on eight lakes in Pope County. The Minnesota Pollution Control Agency initiated a project entitled the “Pope County 8 Lake TMDL Study”. The lakes identified in this project are: Ann, Emily, Gilcrest, Leven, Malmedahl, Pelican, Reno, and Strandness. All States are required under Section 303(d) of the Federal Clean Water Act to identify and restore waters not meeting the State’s standard for water quality.

A test known as ‘Total Maximum Daily Load (TMDL)’ is used to identify impaired water for excessive nutrients, usually phosphorus. The study will identify sources of pollutants in a body of water, determine the reductions in nutrient loads for the lake to meet State standards for water quality and develop a strategy to restore the lakes. 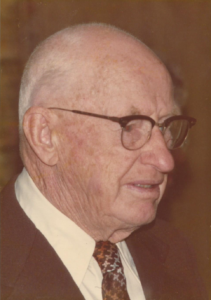 Herman Rosholt and his wife, Olga, purchased a farm in New Prairie Township in 1938. Rosholt had previously farmed in Otter Tail County—both as a youth with his parents and then again in the 1920s—and homesteaded in Opheim, Montana right after he graduated from Luther College, Decorah, Iowa in 1913.

During the decades he farmed near Cyrus, Rosholt was active in local government and various conservation organizations. He helped establish the Pope County Soil and Water Conservation District in 1948 and at various time served as chairman, vice chairman, secretary, and treasurer.

In 1959, he was one of the organizers of the Barnes Aasted Research Association which was instrumental in locating the North Central Soil Conservation Research Center in Morris, and he was chairman of the board and director of the Association for many years. Rosholt was appointed to the Minnesota State Soil Conservation Commission by the governor in 1961.  From 1965-1971, he was a member of the National Association of Soil and Water Conservation Districts Research Committee

As a member of the Pope County and WesMin Resource Conservation and Development project from 1963-1973, he helped develop a number of resource projects, the largest of which was Bonanza Valley.   He was instrumental in contracting the U.S Geological Survey to do a groundwater study there in 1966-1968.  He spearheaded the fundraising campaign in Pope County and served as the chairman of the Bonanza Valley Steering Committee from 1966-1972. Rosholt received a Distinguished Service Award from WesMin RC&D in 1973. 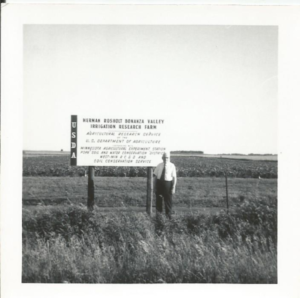 Rosholt Research Farm located near Westport in Pope County was purchased by Pope, Kandiyohi, and Stearns SWCDs on May 27, 1968. The motivation to purchase property was to conduct soil and water research. After a lengthy study was conducted by a Soil Scientist, it was determined that the 40 acres had the required uniform soil type, soil depth, level, topography, and adequate water for the irrigation research. Eventually Pope SWCD became the sole owner of the farm.

Research at the farm over the years has been conducted by ARS Soil and Engineering Scientists from the Morris ARS Station. Cooperation research projects were conducted under the direction of University of Minnesota Soils and Agronomy Extension Specialists and Orville Gunderson, Area Soils Agent, Morris, Dean Eisenhauer and Jerry Wright, Area Irrigation Engineers, and Jack Morris, Pope County Extension Director who gave local leadership to conducting research and demonstrations.  The US Forest Service conducted Cottonwood Research Trials. Pope SWCD in conjunction with WesMin RC&D planted Hybrid Poplar Stool beds in 1993. The stool beds were harvested every year in December.

Today, the stool beds are gone, however, research continues at Rosholt Farm. A new partnership between the Minnesota Department of Agriculture, University of Minnesota, Prairie Lakes Co-op, Pope and Stearns SWCDs is underway to provide a better understanding of nitrogen fertilizer management and the associated water quality impacts on irrigated, course-textured (sandy) soils.  This project will assess nitrogen losses to groundwater resulting from different fertilizer application rates, application timing, and application methods and provide critical information on water quality impacts.

Water quality monitoring will be accomplished using specialized equipment called “suction-tube lysimeters” that are buried and strategically placed within the test plot.  Water is pulled through lysimeters’ ceramic tip that is under vacuum, much like a plant root.  Lysimeter sample lines are enclosed in protective PVC pipe and buried in trenches below the surface so normal tillage and other farming operations can be performed.  Water samples are collected weekly during the entire growing season and analyzed on site.  Researchers will also use high tech, in-field chlorophyll meters to measure plant nitrogen concentrations and provide information about plant nutrition during the growing season.

This partnership will reestablish the Herman Rosholt Farm as an educational hub for irrigators, industry, educators and policy makers.  Additional outcomes include:

For more information about the Rosholt Research Farm contact Pope SWCD.  This project is funded by the Clean Water Land & Legacy Amendment.

Every week, over two-hundred water samples are pulled from suction tube lysimeters that span across three 535×60 ft test plots at the Rosholt Research Farm. All lysimeters along the fields are placed at depths ranging from four to six feet below the surface. Each field section has a uniform coarse-textured soil type. However, all plots explore a different row crop and rotation, along with a different fertilizer application rate. The east section is soybean-corn, the central section is corn-soybean, and the west is corn-corn.

Due to the susceptible soil type at the Rosholt site, nitrogen studies are a primary focus. Following sample collection, nitrogen analysis is run on each individual water sample. Nitrate levels are determined using a HACH spectrophotometer model DR6000. A HACH spectrophotometer gives nitrogen concentrations by reading wavelengths that pass through the sample as it funnels through the vial within the machine. Through pre-programmed software, wavelengths are converted into concentrations. These values give an idea of groundwater nitrate levels across the plots.

In addition to the suction tube lysimeters, data is also collected from drain gauges, barrel lysimeters, and rain gauges. Drain gauges are used to measure the volume of water draining into groundwater. The water samples pulled from the drain gauges are also analyzed for nitrates. This information is considered when studying how leaching affects nitrate concentrations. For a related study led by the University of Minnesota, water samples are also collected from barrel lysimeters that are buried within the soil profile throughout the plots. These open cylindrical containers accumulate water as it filters through the ground. Similar to samples pulled from the drain gauges, volumes and nitrate concentrations are also taken from the barrel lysimeter water samples. Aside from nitrogen studies, irrigation studies are also being conducted at the Rosholt Research Farm. In order to determine when the irrigator should be run, rain gauges are used. Rain gauges provide precipitation amounts, indicating how much rainfall the soil is receiving.

Pope SWCD acts as the local contact for the Minnesota Climatology Working Group to gather daily rainfall information. Dedicated volunteers complete rainfall and weather condition forms that are used to track the ever changing Minnesota climate. Rain and snowfall information is used to provide soil moisture/conditions, track storms, and identify drought conditions as they occur.

To view maps, current conditions, recent weather events, and additional information, go to: http://climate.umn.edu. If you are interested in becoming a volunteer rain monitor, contact Pope SWCD at 320-634-5327.