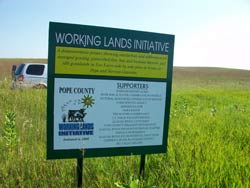 Pope SWCD has been involved in three Working Lands Initiative Projects in Pope County, and one tri-county project that include portions of Kandiyohi, Swift and Pope known as Ordway Prairie.

In 2009, a scattered site Working Lands Initiative project showed how grazing on Public and Private Wildlife Land could be beneficial. The scattered sites were on Private, Nature Conservancy, MN DNR, and Fish and Wildlife lands throughout Pope County. On these grassland sites, participants were able to show side by side comparisons of leaving the land the way it is (idle land), burning, grazing, and mowing. The DNR site on Highway 55 west of Sedan demonstrated the best comparison. The land that was left idle looked considerably different than the land that had been burned, mowed, or grazed. These three options showed similar results that overall benefited the land and the wildlife on it.

A tour was held for the general public, agency staff and elected officials August 19th & 20th, 2009. Tour participants commented on the working relationship of the group. The working group consisted of private land owners, Fish and Wildlife Service, MN DNR, The Nature Conservancy, Pope SWCD, Natural Resources Conservation Service, the Farm Service Agency and more. The Working Lands Initiative program has shown that a diverse work group can work together even though their ultimate goals could be quite different.

The Ordway Prairie Target area includes lands located in Kandiyohi, Swift and Pope Counties. WLI contract requirements in this target area include 10 year contacts between the landowner or local SWCD, NRCS or DNR grazing management plans, leaving minimum 8 inch stubble on grazing and haying practices, and the use of native vegetation. Projects include providing up to 100% cost share to remove invasive trees, restore wetlands and prairies. Invasive species management is provided through the Cooperative Weed Management Program. Landowners are encouraged to utilize NRCS or DNR grazing management plans, improve infrastructure, and move cropland into grassland. Interested landowners may be eligible to receive a flat rate of $300.00 for perpetual easements.